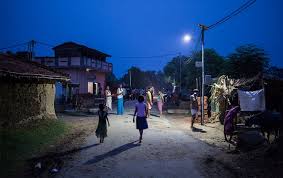 uffalo trampled over it? Rain drenched it? Child dropped it? No problem! This solar flashlight can endure it all, said Bassi in a pitch to her neighbors in rural India to convince them to power their homes with clean energy instead of polluting fuels.

Bassi is one of 2,500 “Solar Sahelis,” or solar women friends, who fan out to different villages and persuade families to use solar energy in the western desert state of Rajasthan, which sees about 300 days of sunshine every year.

With unreliable electricity and hourslong power cuts every day, many rural families in Rajasthan are often forced to rely on candles, kerosene oil lanterns or burning wood, which emit soot and noxious fumes.

They not only can lead to premature death due to disease, but can also cause fire accidents and burn injuries.

That is why solar is the way to go, 26-year-old Bassi, who goes by one name, said in her village of Moonpur, about 130 kilometers (80 miles) from state capital Jaipur, where buffalos and cows wander the dusty streets.

“They just makes more sense — affordable, long-lasting, durable and safe,” said Bassi, who has sold up to 32 solar flashlights since becoming a Solar Saheli last year.

Even then, Bassi said it can be a challenge to win over villagers who are usually wary of the initial higher costs and distrust solar products due to experience with some flimsy products from China.

The most popular product, the Solar Rakshak (solar protector) flashlight, costs between $10 and $20, while a regular battery-run one would be about $5.

But once doubts are cleared, almost every customer is satisfied, said Bassi.

Kamlesh Devi, a mother of two, bought the Solar Rakshak in June after Bassi assured her that it would save her frequent trips to the market for new batteries and lights, and help her children study without any irritation to their eyes.

“I used to buy flashlights for 300 to 400 rupees (about $5) that would malfunction within six months. Sometimes it would fall here or there. The batteries would die quickly. But this is a great thing,” said Devi.

“The kids are studying well. Until 10, 11 at night, even if there is no electricity, they study very comfortably,” she said.

Jaipur-based Frontier Markets, the social enterprise behind the project, said its mission is to provide over 10 million clean energy products to 30 million households in India by 2020.

Women step up
But the project is not just about going green.

It also aims to empower women in the male-dominated, conservative state, where child marriage is rife and girls are routinely denied an education and live a life largely confined to home.

Bassi’s life was headed there too. Forced to marry at 17, she was regularly beaten up by her husband before she ran away and moved back in with her parents.

When she insisted on studying further, her elders refused, saying she brought shame to the family.

That is when Frontier Markets found Bassi in a self-help group for women and trained her to spread awareness and sell solar lights in remote areas of Rajasthan.

“If not for this … I would have just stayed at home, tended the buffalos and done household work. That is all I would have been good for,” said Bassi.

Having never ventured out much or spoken in public before, Bassi said she was jittery at first, unsure whether she would be taken seriously or be able to sell anything.

“But now I feel like I have no fear,” said Bassi, who unlike most rural women travels miles out of her village, interacts with men and earns an income of up to 2,000 rupees ($28) every month.

“Women are not weaker than men. At least I do not have to depend on anybody for money,” she said.

“On days when I feel like buying something or wearing something new, then I know I have my own money and I can do whatever I want.”

The Solar Sahelis have collectively earned more than $2.5 million by lighting over 500,000 homes, according to Frontier Markets.

“In order to drive true women empowerment, they need to be economically secure. The second you put money into women’s hands, everything changes,” said Ajaita Shah, the 34-year-old founder of Frontier Markets.

The rise in family incomes has made the Sahelis confident and more involved in household decisions, she said.

“The fire we saw in some of these women, it is like they were finally recognizing that their voice has value,” said Shah.

Repeated studies show that when women control the family’s finances, they invest more in their children’s education, health care, businesses and communities, which can be a step out of poverty.

Modernity vs. tradition
While such programs seek to boost women’s rights, experts warn they can backfire at times as they upset traditional norms and spark conflict, especially in conservative pockets of India.

Rajasthan is known as much for its beautiful palaces, camel-back desert safaris and colorful apparel as for its age-old customs like purdah, or veiling, of women.

It is home to some of India’s poorest villages, where politically powerful councils, mostly comprising elderly men, have an iron grip over social and moral life.

Women are often expected to conform to established gender roles such as being the main caregivers who look after the home and children despite modern, urbanizing times, experts say.

That is why it is essential to sensitize villagers about changing dynamics, said Shashank Bibhu of CARE India, a charity that works for women from poor, marginalized communities.

“Otherwise, in the past, we have seen that it has led to domestic violence,” he said.

He urged organizations to counsel communities about gender equality and promote supportive men as role models who share household responsibilities.

For Radha Devi, working as a Solar Saheli has not been very easy due to the lack of help from the men in her family. “I struggle to balance household work and this work,” said the 37-year-old, who became a Saheli last year.

“Men do not have to worry about household work … so they progress in life. But women have to think a lot about how they will take out time for their jobs,” she said.

Still, that does not dim her hopes of making it big one day.

“The plan is to open up my own store … and make a name for myself,” she said, wearing a bright yellow Solar Sahelis vest.