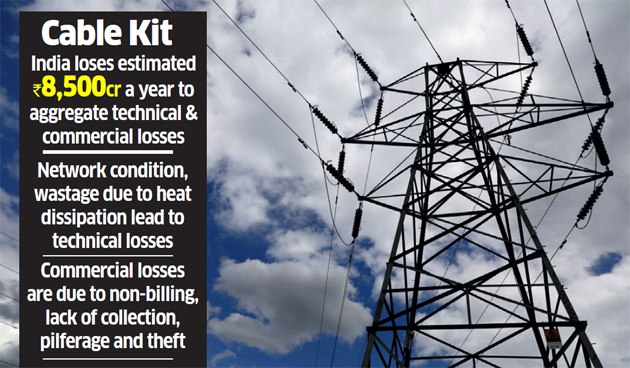 According to estimates, India loses about Rs 8,500 crore a year on account of aggregate technical and commercial losses (AT&C).

“The government is considering coming out with a scheme to fund aerial bunched cables in distribution companies. It is estimated that the scheme would be worth Rs 37,000 crore and cover 20% of the network where aggregate technical and commercial losses are more than 25%,” said a government official who did not wish to be identified.

Madhya Pradesh, Punjab and Uttar Pradesh were among the outliers since these states saw an increase in their AT&C losses by 6%, 1% and 1%, respectively, during the same period.

One of the most prevalent methods of theft is hooking, with pilferers using hooks on non-insulated distribution network wires to get free electricity in the target areas. Ariel bunched cables are insulated and therefore make power theft difficult. Several states have effectively used aerial bunched cables to control power theft. The Centre has sanctioned projects for almost 70,000 km of aerial bunch cables under the Integrated Power Development Scheme.  [Courtesy:The Economic Times]