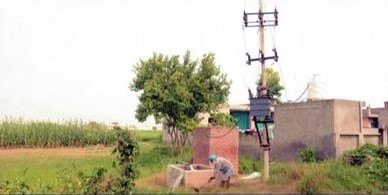 It is reported that every second house in rural areas under Punjab State Power Corporation Limited (PSPCL), functions in the Indian state of Punjab, steal electricity either by direct tapping to consumer’s load or by other conniving methods to circumvent the efforts of the organisation. The best effort of the DISCOM is eaten away by chunk of Power theft prevailing especially in the border district of the state.
PSPCL has recognized these losses to the widespread power theft in few Divisions. For eg., in Amritsar suburban circle, half of the electricity supplied by the power utility is lost by way of antisocial activities of the rural mass.In Tarn Taran circle, which falls in the border zone is crippled by power theft at one side and anti-social activities at other end. Bhikhiwind, Patti and other nearby places report losses of nearly 80% which is never heard of in any utility. As a result, it is estimated that the utility is losing around $ 136 Million USD annually.
The utility could not replace the old electro-mechanical meters with high-end energy meters to an appreciable level so far. In its annual revenue requirement (ARR) for the financial year 2021-22, the Punjab State Power Corporation Limited has submitted report to Punjab State Electricity Regulatory Commission (PSERC) admitting that 12% of the area is theft prone. Political patronage, failure to adapt latest technology, poor governess etc,. are supposed to be the major reason attributed to heavy Power theft. Many landlords are still enjoying pilfered energy because of the unholy nexus with the politicians. However, officials claim that every effort is made to register police case in power theft.
The Anti-power theft squad of PSPCL is delegated with the task of detection of power theft, wrong metering etc. With thirty squads and thirteen Mobile Meter Testing Squads, efforts are being made to book perpetrators. Though the division of labour is clearly spelt out, the results are not encouraging. The utility has launched a campaign in social media ‘’Be Alert” PSPCL on Mission “Punjab, A Power Theft Free State and very active in Facebook postings. Though multi-faceted activities are being done, electricity is still stolen to massive extent and the utility will be marching towards insolvency, if not addressed the issue timely.