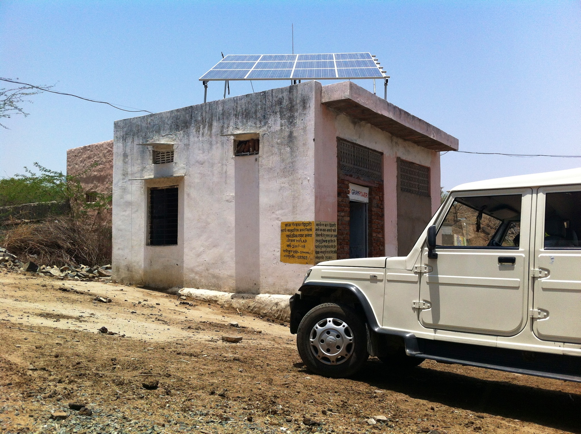 Are Solar Microgrids the Future in the Developing World?

Microgrids are difficult to implement and can be undermined by promises of grid expansion.

Nuclear power was supposed to be, “Too cheap to meter.” The infamous Segway was supposed to transform the way our cities function. Sometimes technologies don’t take off the way we think they will. And, it’s as important to learn from the failures as it is to extrapolate from the successes.

Microgrids are viewed by many as a transformative solution for the future. In the developing world, the technology has the potential to bring a clean, small-scale, self-contained electricity supply to remote areas where a connection to the centralized grid would be relatively expensive.
Governments, private foundations, and international aid organizations have launched ambitious microgrid initiatives to enable rural electrification and promote economic development. By 2030, the International Energy Agency is projecting that microgrid systems will supply almost half of newly connected households.

Our recent experience with a solar microgrid provider in India has fallen short of these expectations. And, we think there are some important lessons in our project’s fizzle.
Our Experience

As we explain in our new working paper, we set out to evaluate the real-world performance of a promising solar microgrid technology in remote areas of India where conventional grid power is very expensive to supply. We partnered with a startup, Gram Power, founded by a UC Berkeley grad, Yash Khaitan. Gram Power’s original goal was to allow unelectrified, rural communities to transition from no power to a smart grid system that integrates off-the-shelf solar panels, modular battery storage, inverters, and a pre-payment model.

The company has been widely recognized for its innovative solutions to rural electrification challenges. Following a visit to India in 2013, Tom Friedman featured Yash in his New York Times column, saying, “The most exciting [clean technology] innovation I saw here was Gram Power.”
We received grant funding to deploy about 40 Gram Power microgrids in rural Rajasthan, India. At the time, the government was subsidizing private sector microgrid providers as part of a large-scale effort to extend electricity access to all. Gram Power planned to charge its customers just enough to cover its after-subsidy costs: A one-time 1,000 INR (~$20) connection fee, a per kWh charge of 20 INR per kWh ($0.40/kWh), and 150 INR per month fixed charge ($3). If all households paid for the power they consumed, and if the solar PV systems operated reasonably efficiently (~13% capacity factor given the local operating conditions), the company projected cost recovery in about 6 years.
In terms of reliability, households were promised 24/7 power as long as they limited their consumption to basic services, such as cell phone charging and lighting (customers were given a CFL bulb as part of the connection package). Customers could add higher wattage appliances, like refrigerators and fans, but continuous supply for higher wattage appliances wasn’t guaranteed.

Our paper goes into more detail, but, in short, Gram Power followed many of the industry best practices. When recruiting customers, they convened community meetings to gauge demand. They hired and trained local villagers to help run the systems. They offered connection packages for commercial loads. They designed smart meters capable of detecting theft. Nevertheless, they ran into problems…
Microgrids Are a Tough Sell

The first challenge arose when Gram Power went looking for customers. The company did research to identify villages that were unlikely to gain conventional grid access in the foreseeable future. They visited 176 of these unelectrified villages to actively market their microgrids.
Many villagers were holding out for “real” electricity. In some cases, local politicians had made election promises that a connection to the centralized grid was imminent. Legitimately, the Government of India has made truly impressive strides towards its promise to provide electricity access for all. Although the fine print of this pledge leaves many households in the dark, the promise of relatively cheap conventional grid power was enough to dissuade many potential microgrid customers.

Households also balked at the price of the Gram Power system. Recall that the Gram Power connection fee was approximately $20. To put this in perspective, the average income among households in the villages that adopted microgrids was around $110 per month. Also, the subsidized per kWh charge for grid power for poor rural customers is less than 5 INR. To cover expected costs, Gram Power’s per kWh charge was four times as high!

In sum, it proved very hard—and expensive—to compete with the promise of subsidized grid power.

Power theft is a problem in India, and Gram Power correctly anticipated this challenge. Yash and his colleagues developed smart metering technology to detect theft using a sophisticated, but impressively cheap, mesh network technology. What we learned the hard way, however, is that smart theft detection is not enough.

Gram Power’s technology can detect when a meter is being tampered with and identify where on the microgrid the problem is occurring. Power supply to this area is automatically shut off in response. But, if you’re in the business of selling power, you don’t want to punish a thief forever. Negotiating this interaction requires a local agent who can exercise discretion and turn the power back on when the theft problem has been addressed.

Gram Power hired and trained local entrepreneurs to not only maintain the system, but also crack down on theft. However, when it came time to report theft or enforce penalties, these individuals were very reluctant. Delegating this unsavory task to community members is complicated by the fact that local entrepreneurs typically have strong personal relationships with the very people they are being asked to monitor and penalize. During our field visits, entrepreneurs acknowledged that theft was happening, but refused to provide names or document the behavior formally.

The upshot is that this principal-agent problem, as economists call it, proved to be an important vulnerability for these smart microgrid systems. Even the smartest microgrid technologies can fail if the incentives of the agents who manage them are not well aligned with system success.

The Future of Microgrids?

Some of the problems we faced could be addressed with better policy. For example, to manage households’ expectations about receiving conventional grid access, some countries have explicitly announced plans to connect certain areas with microgrids. On the other hand, these kinds of pre-commitments can limit the ability of governments to respond to changes in relative costs or evolving policy priorities.
Even with policy changes to increase demand for microgrids, important challenges remain. Private microgrid providers have to cover their costs, so competing with state-run utilities – many of which are both losing money and cross-subsidizing poor, rural customers – is a challenge. It’s possible that future innovations in microgrid deployments could overcome some of these challenges.

Given the problems it encountered, however, Gram Power has suspended microgrid operations and is now concentrating on selling its smart meters to centralized grid operators. With hundreds of millions of grid customers that the Indian government aims to convert to smart meters and the government’s recent pledge to include smart meters for all new on-grid electricity connections, Gram Power’s potential market is huge and growing quickly.

Meanwhile, the Indian government seems to be rethinking its rural electrification strategy, moving away from microgrids and towards providing rural customers with electricity access via solar home systems. Future success will depend on getting both the technology – and the incentives – right.
[https://energyathaas.wordpress.com/]