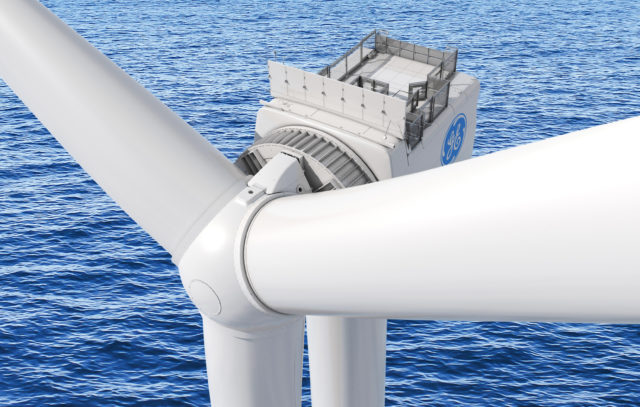 GE Renewable Energy has revealed the first manufactured components for the 12MW Haliade-X, offshore wind turbine, which GE claims is the biggest offshore turbine in the world at 260 meters in height, and with a rotor diameter of 220 meters.

The company showed the first nacelle for the gigantic turbine, a prototype which will be shipped from France to Rotterdam-Maasvlakte in the Netherlands, where it will be tested onshore, giving easier access to the turbine than if deployed offshore. A second nacelle is being assembled for use in “actual operational conditions” at a UK site.

John Lavelle, the CEO of GE Renewable Energy Offshore Wind, said the firm was “on track to start commercialising this new product very shortly.” The new turbine is larger than its closest competitor, the 10MW Vestas V164-9.5 MW wind turbine which has been considered the biggest since its launch in 2014. Although the V164-9.5 was upgraded to 10MW, it falls a full 2MW short of the Haliade-X, and at 220 meters in height, falls a full 40 meters short of it’s new neighbour.

For the first time ever, wind energy generation has surpassed coal-powered generation in the state of Texas.

According to data released in July 2019 by the Electricity Reliability Council of Texas, wind energy contributed 22% of the energy mix consumed in the state in 2019 to-date, narrowly edging out coal by just 1%.The state is the US’ largest consumer of coal, says the body, but cheap natural gas, and renewable energy pricing are helping drive the transition to clean energy in the oil-rich state.Weather is another reason for wind’s success in the state – most of the state’s coal plants are used for peak demand only, and a milder spring and summer have kept demand for coal low.

Texas also has the greatest potential for wind energy generation in the US, and according to a June 2019 report by the US’ Solar Energy Industries Association (SEIA), solar is on the rise too, with the state recognised as the sixth-biggest producer of solar in the country, and projected to be second-only to California by 2021.Whilst Natural gas still holds the lion’s share of generation, at 38%, Daniel Cohan, a civil and environmental engineering professor at Rice University, said that solar will steadily rise in prominence

“For several years in a row now, we’ve had almost a doubling of the amount of solar farms in Texas,” he said. “And it looks like we’re set to have a few more doublings ahead. So, Texas is really becoming one of the growth areas for solar after a very slow start.” “It still remains to be seen whether [wind] surpasses coal for the entire year,” he said. July and August are typically the biggest months for coal generation, and coal could pull ahead.

“But, so far, it just illustrates the big transition that we’re having away from coal and toward wind power,” he said.[Courtesy:Smart Energy International.,www.smart-energy.com]