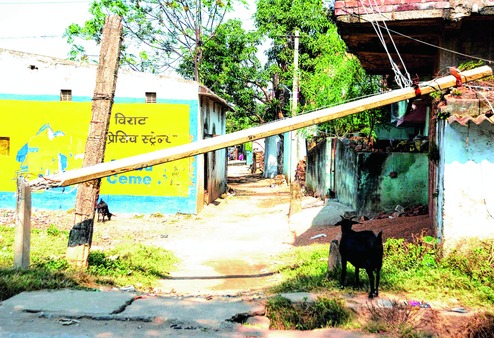 Ranchi: Over 200 residents of Peepar Toli in Argora are allegedly stealing power as an electricity pole, which collapsed after being hit by a Ranchi Municipal Corporation (RMC) truck two months ago, still remains unattended.

According to local residents, at a time when the state is mulling on supplying power to other countries, it’s a shame that Jharkhand Bijli VItran Nigam (JBVNL) officials is taking over two months to repair an electric pole in the heart of the city and ensure regular power supply. “How can the civic body think of big power projects when they cannot repair an electric pole and look into the needs of the people,” said Indu Devi, a local resident.

Another resident Kishwar Sahu said after the pole collapsed JBVNL had disconnected the line to prevent electrocution. “Initially it was fine to disconnect the line but after that no steps were taken to resume the power supply. We are now compelled to depend on illegal connection and any day we might get caught or fined,” said Sahu.

Contacted, a JBVNL official in Ashok Nagar admitted the lapses and blamed the unavailability of electric poles. “The pole is broken and so it cannot be erected. We need to replace it, which is only possible once we get a new electric pole,” he said.

Superintending engineer (Ranchi) of JBVNL Ajit Kumar, however, promised quick action. “Only now I learnt about the issue. I will try to ensure the pole is repaired and power supply is resumed,” he said[The Telegraph]