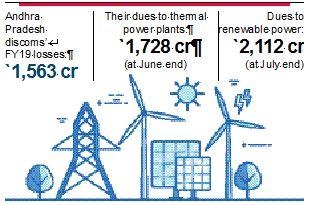 Andhra Pradesh was regarded as a leader among Indian states in embracing the environmentally benign renewable energy sources;
its installed wind/solar capacity of 7,177 MW is around 12% of the country’s total capacity of 63,800 MW.

However, that success story seems unravelling.  Andhra Pradesh discoms’ dues to the renewable power units are now over a quarter of the combined dues of all discoms in the country. According to official data, AP discoms owed Rs 2,112 crore to renewable units as on July 31 — that was 26% of the combined dues of Rs 8,232 crore of the country’s discoms to 22,460 mega-watt (MW) of renewable energy projects, which submitted the relevant data to the Central Electricity Authority (CEA).Had Greenko not “withdrawn” the data of the outstanding dues from discoms, the unpaid amounts to renewable units would have been even higher at Rs 9,954 crore, the CEA noted.

Notably, Greenko is one of the three companies (ReNew and Mytrah being the other two) referred to in Andhra Pradesh chief minister
YS Jaganmohan Reddy’s recent letter to Prime Minister Narendra Modi as firms which bagged most renewable contracts “at exorbitant tariffs”.

“It is surprising to know that out of the 3,494 MW of wind generation capacity, about 63%… was with three developers at exorbitant
tariffs,” Reddy wrote to the Prime Minister. “Wind energy was procured at Rs 5.94 per unit to benefit private developers by paying Rs 1.74 per unit extra, majority of these undue gains going to only the three developers,” the letter, reviewed by FE, added.The new government in Andhra Pradesh, against the advice of the Union power ministry, has formed a committee to revise “abnormally priced wind and solar” PPAs, saying these might have been inked with “malafide intentions” and could have “resulted in unjustified burden on the consumers of the state”.

Crisil recently noted that the state’s move could put additional stress on about 5.2 giga-watt (GW) of wind and solar energy projects with an estimated debt exposure of over `21,000 crore. As reported by FE earlier, Union power minister RK Singh has intimated home minister Amit Shah that the move “has alarmed the sector and the investors” and “if this is not corrected, the FDI will stop coming, the banks will stop financing, and the growth in the renewable energy sector will come to a halt”. Since FY15, FDI in the renewable energy sector has been a substantial $4.8 billion.

Reddy wrote to Modi, “investors have taken an informed judgement with respect to the arrangement and were completely aware of the risks associated with the same,” arguing that they put their money in these projects knowing that the financially stressed state already had adequate power supply arrangements and thanks to muted industrial growth, discoms were not getting new high-paying commercial consumers, warranting larger subsidy support. “Had the investors exercised financial discipline and prudence, they would not have attached much relevance to the commitments made by the previous government,” the Andhra CM added.The FY19 losses of Andhra Pradesh discoms were Rs 1,563 crore which the newly elected state government has attributed to “high cost renewable energy purchases”.

The state’s aggregate technical and commercial losses — a benchmark for power pilferage and discom inefficiency — of 11% is one of the lowest in the country. Andhra discoms has also managed to bring down its dues to thermal power plants to Rs 1,728 crore at July end, 39% lower year-on-year. On a pan-India basis, total outstanding dues to thermal generators have actually increased 48% to Rs 32,445 crore in the same period.[Courtesy:Financial Express] 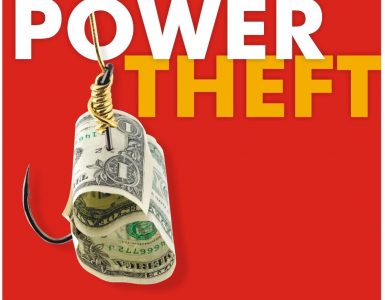 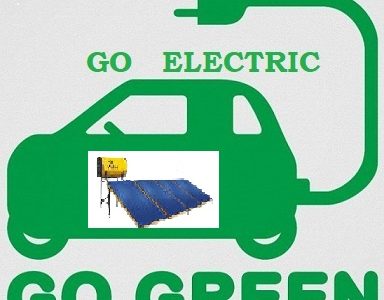 The usage of electricity as a source of energy comes to 6th place in India. It is non-polluted, applicable to meet most energy demands. Consequent to the reduction of the price of electricity from renewables, the role...