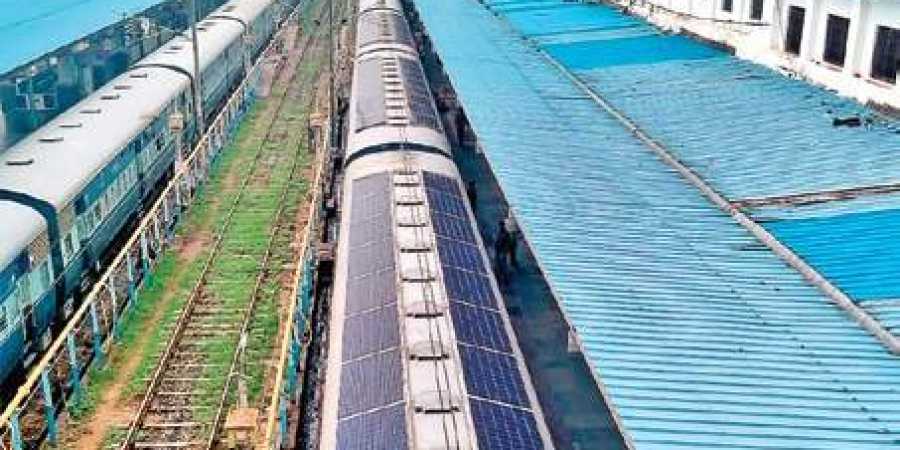 COIMBATORE: With a view to reducing the dependence on conventional sources of energy, the Salem Division of the Southern Railway has started tapping renewable energy successfully by placing solar panels on the roofs of the six coaches of Jan Shatabdi Express between Coimbatore and Mayiladuthurai The railway has spent Rs 15.20 lakh for placing 4.8 kwp solar panels on six coaches. A Delhi-based private contractor commenced the work on May 29 and completed it a month ago. Renewable energy is used for operating lights and fans in these six coaches. This has also helped reduce maintenance works. In the absence of solar energy, supply to the coach is catered by the conventional alternator/battery through a charge controller. A senior official from Electrical Department in Salem Division said, “We have been tapping 20 units of solar power used for operating 56 lights and 34 fans. As a result, 110 volt battery and alternator would get more life. We used to change batteries once in four years. However, we can now extend the lives of the batteries and the alternator by a few more years.”[Courtesy-The New Indian Express]

Comments from a reader

Solar panels generate electricity when there is sun light. It is a big foolish idea for making news or propaganda. Each kilowatt power capacity of solar panels weigh nearly 100 kg (excluding any battery storage) and they generate 5 KWh in a day on average during day time/sunlight. What is the additional fuel incurred or loss of live load/passengers tariff lost due to additional load of the solar panels? Even then it is not a reliable source of power supply to meet round the clock needs.A back up power source is must. There is no economic sanctity for mounting solar panels on mobile unit like passenger trains. Any body has done any economic analysis.
[Courtesy-The New Indian Express]