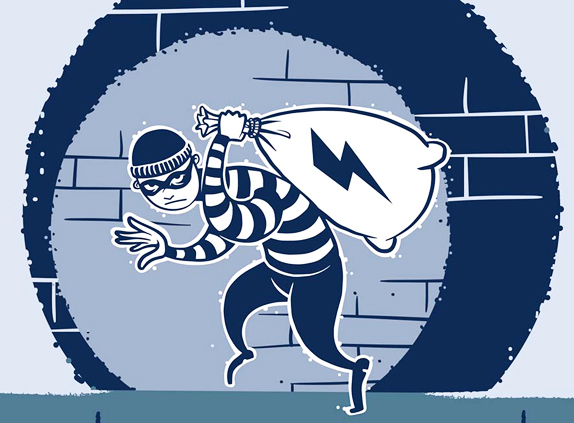 The discoms registered FIRs against 4,16,13 consumers who were allegedly caught stealing electricity but did not agree to get the offence compounded for different reasons

More than one lakh cases of electricity theft have been detected during ‘all-encompassing’ raids in Uttar Pradesh since April this year, with Ghaziabad, Aligarh and Meerut topping the chart.

Uttar Pradesh happens to be a state where nearly 40% of electricity supplied to consumers is never paid for even today and a substantial amount of it gets stolen despite all the reforms carried out over the past two decades.

A district-wise report prepared by the UPPCL’s Raid Management System (RMS) shows that all the five discoms (Meerut, Agra, Lucknow, Varanasi and KESCo) together conducted a total 1,67,051 raids on suspected premises, catching 1,058,74 cases of power theft between April 1 and November 5, 2018.

The discoms registered FIRs against 4,16,13 consumers who were allegedly caught stealing electricity but did not agree to get the offence compounded for different reasons. An amount of Rs 13 crore was also realized from the accused as compounding, summon fee etc while a hefty amount of Rs 95 crore, that has been assessed as the cost of power theft, is still to be recovered.
The report indicates the highest number of cases of power theft were detected in Ghaziabad (6,625) followed by Aligarh (5,338) and Meerut (4,804). Other districts following closely were Moradabad, Mathura, Bulandshahr, Muzaffarnagar, Firozabad and Lucknow. Incidentally, almost all ‘top ranking’ districts barring Lucknow happen to be in the affluent western region.

Insiders attribute the success to the state government giving a free hand to deal with the power thieves. “Earlier, we were always asked to ignore or go soft on certain areas often termed as ‘sensitive’ by previous governments. But this time, we are conducing raids everywhere with the same force and that is paying good dividends,” said an official.

Energy minister Shrikant Sharma said the government had zero tolerance on electricity theft to bring the power corporation out of financial losses. “The teams have been asked to conduct raids in a most non-partisan and transparent manner, taking appropriate action against anyone, whosoever he may be, when found guilty of pilferage,” he said.
s per the Union ministry for power’s website, the current aggregate commercial and technical losses (AT&C) in UP are 37.92% and the gap between the actual cost of supply and actual revenue recovery per unit is Rs 0.37 per unit. Any AT&C losses above 10-15% are often treated as pilferage.

In its annual revenue requirement (ARR), the UPPCL had projected its expenditure to be more than Rs 52,000 crore for the purchase of around 1.28 lakh million units of electricity from various sources. “But a substantial portion of electricity we purchase is stolen during its supply to consumers causing huge revenue loss to the UPPCL/discoms,” the official said.