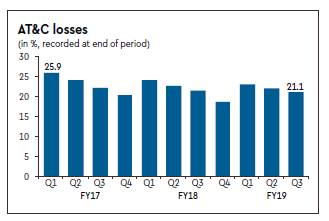 Inadequate hikes in power tariffs, incremental rise in ‘open access’ transactions, rise in salaries due to the Seventh Pay Commission, late subsidy disbursal by the states and outstanding dues accumulating from state government departments have been mentioned as the main challenges for meeting targets set under UDAY.

Even as the March-end 2019 deadline for meeting the operational targets set under the Ujwal Discom Assurance Yojana (UDAY) is approaching, the aggregate technical and commercial (AT&C) losses —electricity units lost on account of pilferage ie Power Theft — of the 27 electricity distribution companies () in 26 states and UTs remained as high as 21.1% at the end of December 2018, down only 0.4 percentage point from the level recorded a year earlier.

This loss is targeted to be restricted to 15% or below by the end of March 2019.

AT&C loss of one percentage point translates to financial under-recovery of about INR 4,0000 million on a pan-India basis. About 52% of the total households connected under the Saubhagya electrification scheme are in these states, with Uttar Pradesh and Bihar being the largest beneficiaries.

Inadequate hikes in power tariffs, incremental rise in ‘open access’ transactions, rise in salaries due to the Seventh Pay Commission, late subsidy disbursal by the states and outstanding dues accumulating from state government departments have been attributed as the main challenges for meeting targets set under UDAY.

UP officials have attributed the rise in rural electrification as a reason behind the deteriorating collection efficiency. They also said the power purchase cost in the state has risen 14% year-on-year to Rs 4.48 per unit due to coal shortage, the rise in coal and railway transportation cost and higher transmission charges.

They have also sought the Central government’s intervention in recovering outstanding dues from the state irrigation department.

Officials from Jharkhand pointed out that while the state government was not paying the discom on time, the Seventh Pay Commission has caused ‘establishment costs’ to rise more than 200% to `1.05 per unit.

Weakening of discom finances have larger implications on the overall power sector as outstanding payments to electricity generators — a lot of which are already under stress — continue to rise under such circumstances.

At the end of October 2018, total dues outstanding to generators stood at INR38,2400 million

In a review meeting recently held here to map the progress of various schemes under the Union power ministry, it was also noted that regulatory dues nationwide stood at a whopping Rs 1.4BIllion INR at the end of FY18.

This represents the pending payments receivable by power producers due to increase in tariffs stemming from additional taxes and duties, but challenged by discoms. Traditionally, relief under change in law takes two to three years.

Governments of 16 states have taken over around 2.09 Billion INR debt of their as per UDAY plan to get the out of the high interest-bearing debt trap. Out of this, 2.09 Billion INR was not included in the calculation of deficit of the respective states in FY16 and FY17.

In a meeting recently held between the 15th Finance Commission and the power ministry, it was pointed out that the fiscal positions of states have been impacted by exposure to guarantees provided to power utilities.

“The liabilities on account of guarantees provided to power units are quite significant in a number of states,” a government statement recently said. The power ministry had also expressed its scepticism about the capacity of the market to absorb the remaining UDAY bonds worth nearly INR 370000 Million.Courtesy Express]