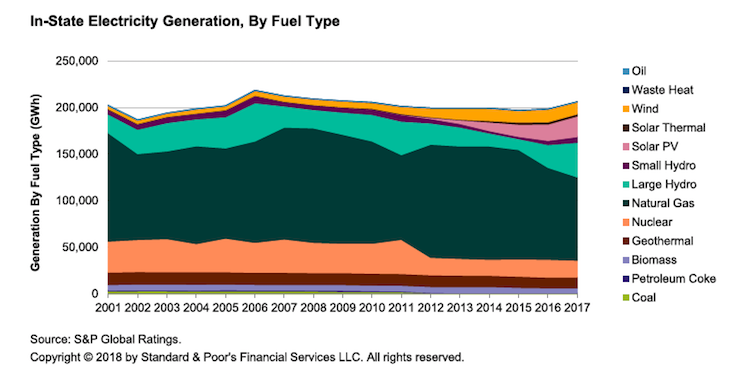 When California voted to get 100 percent of its electricity from renewable sources by 2045, it sent a signal to the market about which types of power generation technologies will remain competitive into the future. And according to Mike Ferguson, Director, North America Energy Infrastructure and Sustainable Finance with S&P Global Ratings, what California does, other states may soon follow.

“You have to look at what California is doing as potentially being trend setting,” he said in an interview, explaining that the state has the potential to be somewhat of a bellwether, especially on environmental policy.

“We have to look at how it has potential implications for the rest of the American generating grid as well,” he said.

Ferguson pointed to solar as being a very competitive energy resource, especially compared to coal. “Part of the reason it’s competitive is that you look at what its dispatch characteristics are verses coal,” he said. Coal-fired power plants are inflexible, said Ferguson.

“They can’t ramp up and down and respond to short-term price signals or operating signals in the market,” he said, “so as a result of that, the competitiveness of coal plants has gotten a lot weaker.”
Because overall power prices have fallen, according to Ferguson, it’s flexibility that is more valuable today.

“More flexible assets in general are going to be much more valuable going forward, certainly in California,” he added.

Ferguson considers battery energy storage a technology to watch because of its ability to ramp up and down quickly.

“You have to look at these assets, whether its a new battery or a new CCGT [combined cycle gas turbine], these are going to be 30-year technologies,” he said.

“They are going to become less and less valuable over time until at some point there is no value at all,” he said.

Ferguson explained that he doesn’t believe that the rest of the country will arrive at this point as quickly as California however, the economics of solar and batteries continue to improve and the economics of gas-fired plants have improved due to low gas prices but “there is probably a limit to how low [gas prices] can go and so with CCGT’s the upside is probably more limited and even though they have better ability to ramp up and down than coal plants.”

Ferguson also pointed out that demand is changing quickly, too, and GDP growth is no longer as closely correlated to power demand growth as it used to be.

“We’ve gone from manufacturing centric economy to being something that is much less energy intensive,” he said, adding that “people are more in tune with how much power they are using.”

“The nice thing about hydro plants is that they last a long, long time with lesser amounts of capital. So, for hydro assets, I think the benefit that they have — and that’s the same as geothermal — is that they can basically run around the clock as long as they have enough resource,” he said.

“So, when you are talking about moving to a grid where the conventional baseload generator — coal and nuclear — are going to have a lesser place because there just isn’t as much need for them, you have hydro and geothermal that can in some ways overcome that.”