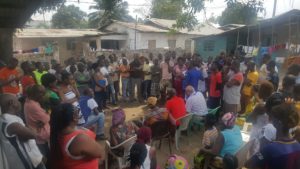 Public to Join the War Against Power Theft in Liberia.

T he Communications Manager of the Liberia Electricity Corporation, Mambu James Kpargoi has called on Liberians to join the fight against electricity theft.
Mr. Kpargoi said power theft is undermining the full revitalization of the electricity sector and resultantly impacting economic growth in the country.


Addressing residents of Cabral Estate during a town hall meeting, he reiterated that the LEC is losing in excess of US$35 million to electricity theft, which undermines expansion projects and slows the connection of more users to the national electricity grid.
“Every other sector is hinged on the electricity sector. The hospitals, schools, factories and other institutions all require reliable and affordable electricity in order to operate. When criminals steal over 50 percent of what LEC generate it impacts all of these sectors. The cost of electricity would remain high due to their criminal activities. This stagnates economic growth,” Kpargoi explained.
He said it is obligatory for Liberians and the general public to expose individuals in their communities that are engaged in power theft in order to assist ongoing efforts by the LEC and government security forces to defeat the menace.
“These unscrupulous individuals have been making life very unbearable for us. They illegally connect more users to our transformers overloading them, beyond their carrying capacities. When the transformers eventually get damage our communities become pitch dark and then the criminals begin to prey upon us. Our kids are left without lights to study. It is time for the communities to take action by joining the fight against power theft in order to save the electricity sector,” he emphasized.
Network Supervisor, Brendan O’Connor told residents to resist extortion by individuals claiming to be acting on behalf of the LEC in the field. He said monies collected from residents in the field do not go into the coffers of the corporation but instead into the ‘back pockets’ of these extortionists for the private use.[http://lecliberia.com]
“The LEC do not have money. The LEC has been going down for some time now. The corporation is losing big time due to power theft. Don’t pay money to anyone for services outside of the LEC office at Waterside. Monies given to individuals do not come to LEC. They go into their back pockets. This is undermining our projects,” he noted.
In another meeting with residents of Saye Town Community in Sinkor, the LEC Public Engagement team informed residents that plans are underway to replace two damaged transformers that have been out of action for over four months.
Kpargoi assured residents of the management’s plan to restore electricity to all communities with damaged transformers. Following the installation of the new transformers, he encouraged Saye Town residents to threat the installations as their own and protect them against criminals.
For his part, the Chairman of Saye town, Abraham Roberts thanked the LEC for the assurance to restore power to the community after so many months.
He also thanked the residents for behaving responsibly throughout the period the community was without electricity. He promised that the community would work with LEC to combat electricity theft. “I can assure you that we going to work with the community, and your technical team to protect our transformers when they are restored” he said.
The LEC recently launched a community engagement campaign within its network area. Already, the campaign has covered 21 communities. During the town hall meetings, residents have undertaken to protect their installations against the activities of criminals that have made illegally connections to power lines thus overloading transformers beyond their carrying capacity. Management recently embarked on a project to replace over 96 damaged transformers in various communities.