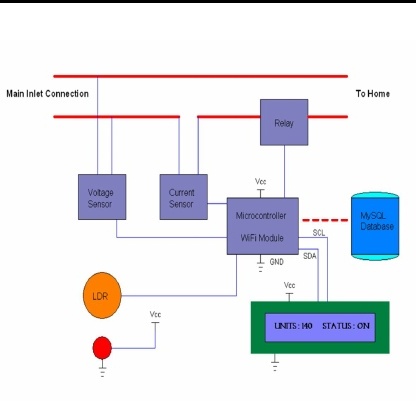 Abstract: Energy meter is the key component of electricity supply system whose reliable functioning is very important for accurate billing, controlling and monitoring of electricity consumption.

The current meter reading process is time consuming, involves human intervention and it may involve the errors caused by humans. In this paper we propose an automated system design, which automates the electricity meter reading by incorporating the IoT (Internet of Things) technology in electricity energy meter. In current electricity metering system, meter tampering can be done easily for the purpose of electricity theft. In proposed system, Theft Detection unit connected to energy meter will identify theft attempts and notify to the server side on immediate basis so that further action could be taken. This automated system provides accuracy in billing and also enables the consumers to do power optimization by providing electricity consumption information on frequent basis through android application. This automated systems also introduce automated disconnection of the electricity in the case of any tampering happens or in case where consumer fails to pay the electricity bill on time

INTRODUCTION
Electricity is the major invention that plays a vital role in the development of any country. The data collection of energy consumption and distribution is required for billing and monitoring. This information is very important for the purpose of energy analysis and optimization. Energy meter is the key component of electricity supply system and hence its reliable functioning is very important for accurate billing, controlling and monitoring of power consumption. The electricity energy meter can be effectively automated with the use of IoT. In an IoT based automated electricity energy meter, Internet is the main method of communication between the energy meter and server side. A microcontroller ESP 8266 is interfaced with energy meter which provides the functionality of both a Wi-Fi module as well as master controller. The microcontroller monitors every pulse of the energy meter reading and sends the measured reading information through IoT to the central server which processes these meter readings information and generates bill.

Current Electricity Metering System
Currently in India, an authorized person of EB (Electricity Board) visits each consumer’s place and note down consumed energy units and according to that charges are calculated for consumed units of electricity. It is a time consuming process in which problems may arise due to error caused by authorized person. This meter reading process can be automated by incorporating various IoT with electricity energy meter. This system allows consumer to check his electricity usage frequently through android app. This can help the consumer for power optimization which is very important for development of country. Electricity power theft is one of the major issues of each developing country like India. Due to power theft, India loses around billions of rupees because of unbilled consumption and unlawful usage of electricity energy. In existing system, meter tampering can be done easily for the purpose of electricity theft. It is one of the major problems of electricity grid. Each consumer needs to pay an amount per unit usage of electricity on schedule. In current system, if the consumer fails to pay the electricity bill in given period of time then electricity transmission is disconnected manually. To overcome these problems of current metering system, the proposed system is designed that efficiently improves the electricity metering system.

LITERATURE SURVEY & RELATED WORK
In recent years, various automated systems have been proposed for electricity energy meter. These systems provide automation for meter reading process, theft detection and disconnection of electricity transmission. The meter reading process can be automated with the help of ZigBee technology, RFID (Radio Frequency Identification) or GSM network. [1] The meter reading process can be automated using ZigBee technology but ZigBee network is less secure, involves high cost replacement, not efficient for long distance communication. RFID tags can be used for automating the meter readings of electricity energy meter but active RFID tags are costly and replacing current meter reading system with RFID reading system is not feasible. GSM (Global System for Mobile Communication) is a wireless communication mechanism used for sending data as SMS on mobile phone. GSM network is finest than ZigBee technology, RF communication methods. [2]There are two types of the Electricity power losses: technical and non-technical. Technical losses are mainly caused by power supply dissipation because of faulty transmission and distribution lines, transformers and measurement systems. The non-technical electricity power losses consist of electricity theft, non-payment by consumers, and the errors in accounting and record keeping. Power theft losses are difficult to estimate but they run into huge amounts in India and other developing countries. In current electricity metering system, tampering can be done easily for the purpose of electricity theft and the EB server side gets notified very late. It is one of the major disadvantages of the electricity system.

Automated Disconnection
Disconnection of electricity transmission is needed for either of the following reason: If the electricity bill is not paid within given period or if any theft attempt to electricity energy meter is identified. In existing system, the disconnection process is time consuming and involves human efforts. The proposed system makes this process of disconnection automated with the use of Relay. If any theft attempt is identified or electricity bill payment is delayed then server side send command to microcontroller at client side. The microcontroller processes the command and then send control signal to relay which disconnects the electricity transmission to that electricity meter.
III. CONCLUSION
The designed system will be very beneficial to our society as well as country’s economic development as the electricity theft rates will be reduced. This system allows consumer to monitor the electricity usage on frequent basis and pay the electricity bill through Android App or Webpage. The system enables the service provider to autonomously disconnect the power-transmission to the particular meter from a distant server. The system is efficient as it reduces human involvement, increases accuracy in meter reading, prevent billing mistakes, provides theft detection[Courtesy:International Journal for Research in Applied Science & Engineering Technology IJRASET]