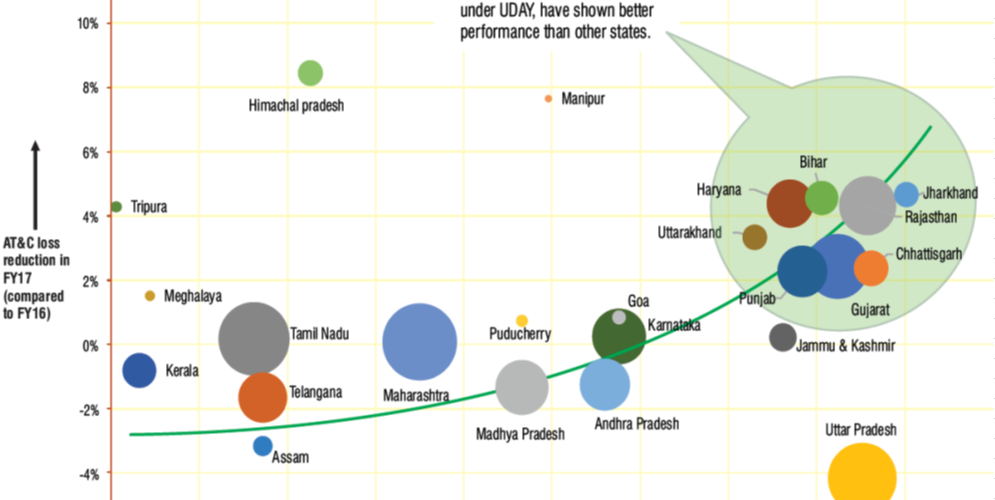 Why discom losses continue to hurt despite Govt’s UDAY scheme

India will have to find out ways to cope with an Rs 4.8 lakh crore debt burden in the power sector. This, however, is most likely to be taken up by the new government formed after the 2019 general elections

By last week, more people had begun to realise that the emperor actually had no clothes on.

Spokespersons for both the central and the state governments had claimed for the past few years that the situation was under control. The Ujwal DISCOM Assurance Yojana (UDAY) was launched in November 2015, and even Crisil — India’s premier credit rating company — touted its virtues. It was a programme aimed at financial turnaround and revival of electricity distribution. But it was evident by the middle of last year that UDAY wasn’t working.

Somehow, everyone forgot to look at the 2 key numbers: the average cost of supply (ACS) and the average revenue received (ARR). If the gap between the 2 increased, then the scheme was not working. If the gap narrowed, the scheme could be said to be working.

Earlier also we’ve talked about the increasing losses of power distribution companies (mostly state owned). This was reaffirmed by a CARE Ratings Power Update Paper of September 10 that aggregate technical and commercial (AT&C) losses nationally were over 20 percent.

Curiously, the UDAY documents released by the Power Ministry in May tried to sell another story. It continues to claim that the difference between the ACS and the ARR has come down by 19 paise per kWh year-on-year to Rs 0.40/kWh in FY17. The document states that AT&C losses too have come down from 21 percent to 20 percent. But it does not mention that many of the losses were disguised as supplies to agriculture. Hence, losses were converted into subsidies, and it is probably such window-dressings that have allowed UDAY to claim that AT&C losses were under 20 percent.

Talk to power sector professionals and a different picture emerges. By transferring losses to UDAY, state distribution companies (discoms) showed lower losses because interest on the transferred amount was calculated separately. In fact, at least one power sector professional, Subhash Sethi, the Chairman of SPML Infra, in his newsletter of August has gone on record stating that the discoms in India have “piled up debt to the tune of Rs 4.8 lakh crore.”

So how does one explain the discrepancy between the Ministry’s claims and red ink spilling all over the table?One clue that the Ministry itself has given out is that many large states did not work closely with UDAY (see above graph). It could be that large power-generating states such as Maharashtra, Tamil Nadu, Madhya Pradesh and Andhra Pradesh did not agree with the UDAY provisions. Or it could be that their need to continue the policy of appeasement of population segments with cheap power was very compelling. Whatever the reasons, India will now have to find out ways to cope with a Rs 4.8 lakh crore debt burden.

With elections around the corner, no state government would like to cut back on subsidies and even power theft. So, expect the quantum of power losses to continue surging. This could mean that a total overhaul of the power sector will be inevitable once general elections are over, irrespective of which party comes to power at the Centre.

Sometimes India chooses to reform only when a default stares it in the face. That is what happened in 1990 when PV Narasimha Rao was confronted with the possibility of a default. Something similar happened at the turn of the century when the NDA government under Atal Bihari Vajpayee found the country’s coffers empty and unemployment soaring.

The same symptoms could be much in evidence when the new government takes charge in 2019. So, tighten your seat belts. A lot of turbulence is likely to take place very soon.[Courtesy:RN Bhaskar,Moneycontrol]